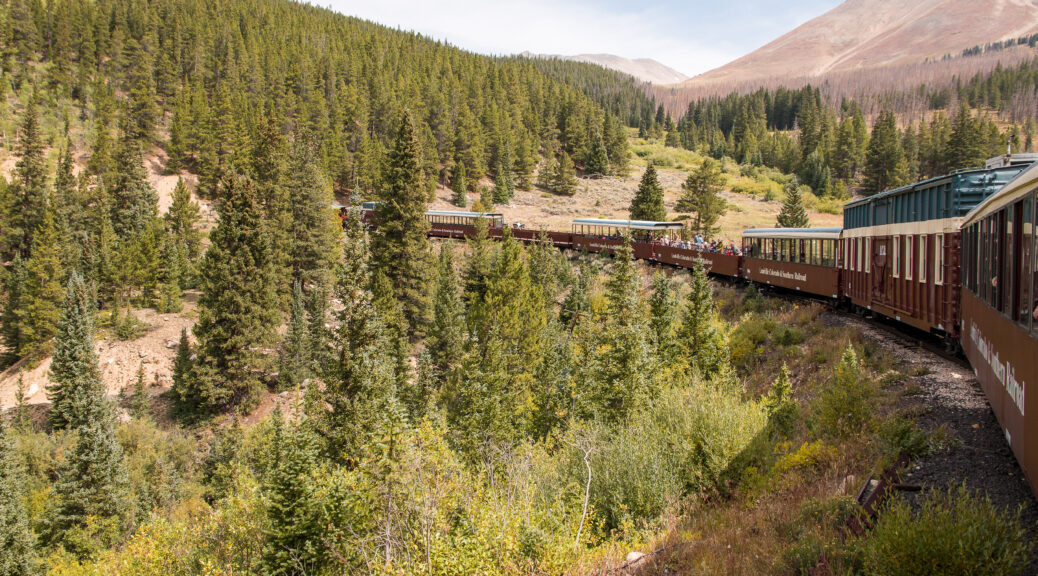 We all crashed hard after two long days of traveling across this great nation (See travel days 1 & 2 HERE.) While traveling, we are always on the lookout for local breakfast stops that open early to fit our schedules. Our first morning in Avon found us at the Avon Bakery & Deli where on a whim I picked up a “French Toast Sandwich”. And it became my new favorite breakfast food for the trip!

After stuffing ourselves a bit too much, we headed towards Leadville with two very excited children who couldn’t wait to ride the train. On the way to Leadville we passed by the town of Gilman which is now a modern day ghost town after it was declared a superfund site in 1984. It was odd to see a more “modern” ghost town. It was also hard to imagine living in a town literally perched on the edge of the cliff. Winters must have been particularly dicey! The site is now fenced off with many signs warning about trespassing.

Just past Gilman is a pretty cool arch bridge that spanned the valley:

The ruins of a cabin off Highway 24 also led to another quick photo stop:

We arrived in Leadville with some time to wander around. After a quick photo op while there wasn’t anyone in the parking lot we headed out of town to run the Leadville “mining tour” loop with my folks following in their van.

While most of the route is a graded gravel road, we did take one wrong turn that involved leading my folks down a 4WD road in their 2WD Astro van. After that adventure, we made it back to the Leadville, Colorado, and Southern Railway train station right as the train pulled up. The kids were just a wee bit excited and gave the engineer a nice big wave.

We lucked out and got to take the extended 3 hour fall tour all the way up to the Climax mine. Due to the unseasonably warm weather, the leaves weren’t turning colors on the trees just yet. It was still a beautiful ride as the tracks wound their way up the mountain.

All of the seats on the train face out so no leaning over to see out the window. You can choose between fully open, fully closed, or partially covered cars depending on your mood and the weather. I highly recommend getting a seat on the side opposite the station, facing the town. Also known as the “downhill” part of the ride. This is the most scenic side as the other side of the train faces the side of the mountain most of the way up.

The conductor did a great job on providing narration throughout the ride. He explained the history and geographical features of the area as well as pointed out the various sights.

The train also features a snack car with hot dogs, popcorn, and drinks for a reasonable price. The snack car also doubles as the souvenir car. There is also a restroom car at the very back of the train. Good to have for a 3 hour ride. The ride was long enough that a couple little rail fans had to take a short nap.

On the way back down, the train stopped for a short time to let folks stretch their legs and check out the old water tower. They also let people tour through the Engine and a Caboose they had on a siding.

We loaded back up and kept on rolling back down to the train station. The boy had to stretch his legs for a bit, so we went for a little walk.

Overall, we all agreed the ride was well worth the money. Even though it was 3 hours long, there was so much to see that the time flew by. (The normal route is 2.5 hours versus the fall color 3 hour tour.) The kids had a great time as well. It was nice that you were able to move around on the train as well and go from car to car. You can bring your own food so we brought our lunches on the train and we saw several others doing the same.

Back at the station, we bade farewell to my folks and headed off to run down the Halfmoon gulch trail for a bit. Our goal was to see the old mine at the end of the trail, and to find some rocks for the kids to throw into a body of water of some sort. We succeeded in half of those goals

After wandering our way all the way up the trail, we eventually ran into a private locked gate that blocked access to the mine site we were trying to see. So that was a bit of a bummer, but the wife managed to grab a decent shot of it off in the distance.

So we turned around and headed back down. At this point the kids were starting to get antsy, so we found some rocks and water and let them do their thing. Throwing rocks in the water is their favorite Colorado activity. Good thing we drove 14 hours to throw rocks!

And of course, we had to grab a couple of glamour shots of the area as well.

Once we left the trail, we made our way back to Leadville for some dinner. We stopped at Wild Bills to grab some burgers and ice cream. Not a bad way to wrap up the day!

As often as we try to get outside, it still feels

Kids are a great reminder to not be afraid to embr