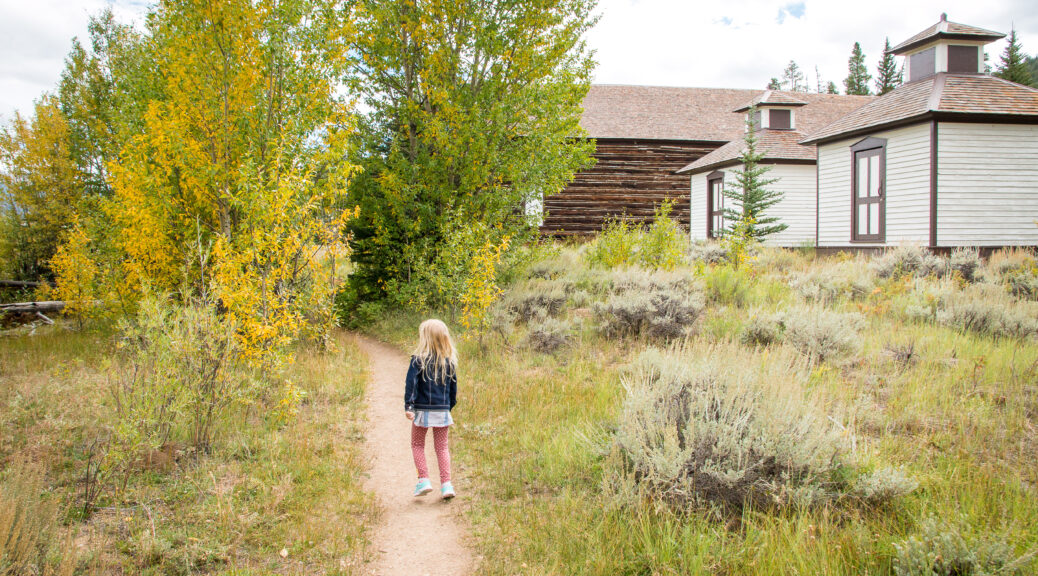 Day 4 found us up and early as usual. Our plan for the day was to take another trip down to Leadville (about 45 min from our hotel). We had a Twin Lakes boat ride and historic tour booked. On the way out there we made a quick detour to grab another photo of the ghost town of Gilman and take a closer look a the Red Cliff Bridge on Highway 24:

We also made another brief stop along the way at the Former Camp Hale on Highway 24 between Red Cliff and Leadville. This scenic spot was a military training location established during World War II. Located at 9,200′ above sea level, it was used for training the army in winter conditions. Not much remains of the training site which was abandoned in 1965 but some remains can be seen. Our GPS even showed a network of roads in the valley that no longer exist.

Since we still had a little time to kill before our tour began, we stopped the Willis Gulch Trail near Twin Lakes for some exploring. Willis Gulch trail head has a few primitive camp sites with ample parking. The site overlooks the Twin Lake area and is a great place for a couple of kids with some wiggles to burn off a little energy.

After some good rock throwing, we wandered over to the boat ramp at the lakes to take a boat tour over both Twin Lakes to the old Interlaken resort site. Interlaken was a resort first established by the lake in 1879. James V. Dexter bought the lakeside resort and grounds in 1883 and greatly expanded the complex. Tourists could take the train to a stop nearby and travel the remaining distance by carriage. It was known as one of the most beautiful and desirable hotels in Colorado at the time.

No public roads lead to the site now. It must be reached by boat or 4.5 mile round trip hike. The couple running the boat tour were extremely knowledgeable about the history of the site and are active in the ongoing restoration projects. They took us inside several of the buildings as well as explained historical details about each of the structures and the area. More information can be found in the links above about the site and the tours.

The kids very thoroughly enjoyed riding on the boat across the lake, and exploring the grounds of Interlaken.

The resort once offered some of the finest amenities of the time. There was a two story hotel, fountains, dance pavilion, pool hall, and even a six sided outhouse with leather seats! An orchestra even came from Leadville each week during the summer to entertain guests.

After the tour concluded and we made our way back across the lake. we wandered back over to Willis Gulch to have a picnic lunch. The kids were getting a kick out of having a picnic somewhere new each day! We then took a trip up and over Independence Pass which runs between Twin Lakes and Aspen.

It had been a pleasant 60 degrees at Twin Lakes but it was windy and sleeting up at the pass. We made a quick stop for the short hike at the pass summit.

Once on the other side of the pass we made a stop at the Grottos Trailhead area near Aspen. Mrs. Nomad took a walk over to the view the falls where some good photos were obtained while I hung out with tired and cranky children who refused to hike.

After passing through the traffic and crazy in Aspen, we stopped for dinner at “Grind” in Glenwood Springs. The Grind is located in the beautiful downtown area right next to the river and train tracks. Which meant we were able to combine some very good burgers with watching a train go past. I highly recommend the “Hog Father” burger that I enjoyed.