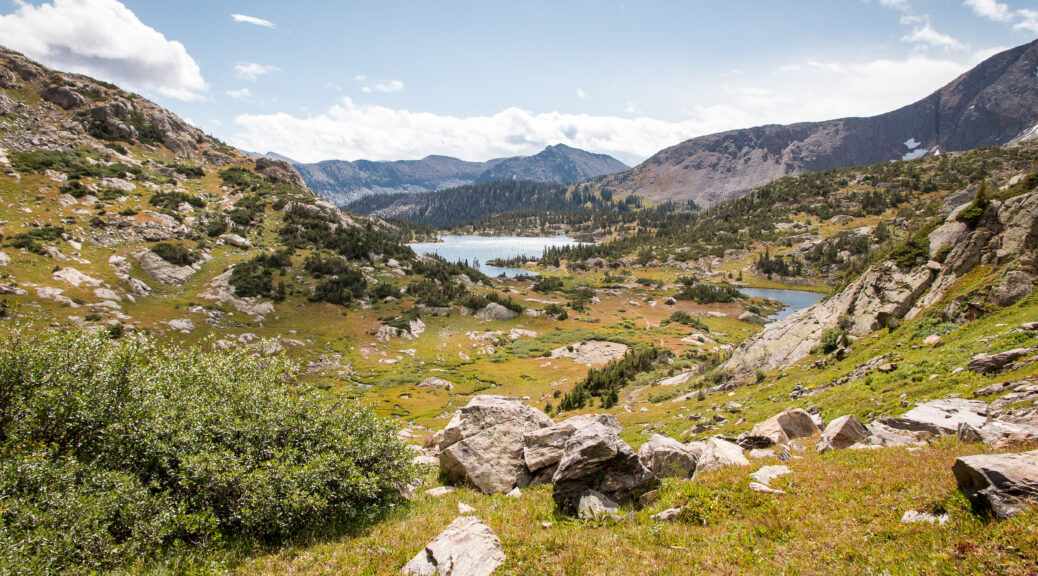 Today was a special, yet somewhat sad day. Special because we got to sneak out on a “no kids” hike in on this trip as we had some built in baby sitters. Sad, because we didn’t get to share the day with the kids. However, the plain truth is the kids are in that in-between stage of “too big to ride on our backs in hiking carriers, but not quite big enough to hike on their own for multi-mile high elevation hikes”. In the end, it turned out to be a good thing we not toting them along on this trip as it turned out to be a much longer and more difficult hike than anticipated.

There are so many wonderful hiking destinations that it was hard to pick which trail to tackle. We finally decided on the hike to the Missouri Lakes in the Holy Cross Wilderness. On our way to the trailhead, we stopped at the Camp Hale location again to grab some sunrise photos. While our kids are early risers, it can be hard to keep them both warm enough and entertained while waiting for the sun to make its grand entrance.

After fueling up on a breakfast consisting of bagels, grapes, and coffee, we loaded up and hit the road to our hiking destination for the day.

On the way up there were several beautiful areas along the side of the trail. Such as beautiful valleys

A swift flowing and crystal clear creek runs next to the trail for most of the hike.

There were even some birds keeping an eye on us.

And some cool bridges made out of logs from the local area.

It wasn’t too long before we came upon two avalanche areas that closed the trail down earlier this year. The forest service has been working all summer to clear the debris field. The worst one covered a HUGE area across the valley.

The second area we came to had a massive avalanche debris field which knocked out a chunk of the trail. A rugged bypass had been created to climb up and around the top of the avalanche area. While we took the rugged bypass on the way up to the Missouri pass, we tried to take the more direct way back down, and ran into trouble. But more on that later.

After clearing the avalanche area, we kept running into more and more pretty things to see. With the odd weather this year, there were quite a few flowers still blooming in mid September.

We wound our way up, and up, and up some more towards the lakes while enjoying the views and the showers. We could watch the clouds come over the mountain and we would have enough warning to throw our rain gear on, enjoy a brief shower, then strip back down as the sun would come out to roast us! This pattern repeated itself over and over and slowed our progress.

We were both really feeling the distance and the elevation as we climbed toward the pass. In the end I wound up stopping about 170ft in elevation shy of the official pass. Kind of bummed about that still, but given how the things went on the trip back down, it was good that I did stop. The views looking back down at the lakes were amazing even without continuing all the way to the top.

On the way back down, I was shocked to see a flower bloom in the 5 minutes since I walked by the buds. Crazy weather!

Making our way back down the mountain was not too bad, then turned brutal as we got to the avalanche field. You see, when we were up on top of the valley looking down on the avalanche field, it looked like the trail had been cleared about 98% of the way back to where we thought it was blocked (by the start of the bypass trail).

We thought we were being clever by giving it a go on the main trail on the way back down. Figuring at worst, we would just scramble over a few downed trees and call it good. After all, the crew clearing the debris had to be getting through somehow to clear the other side. Mrs. Midwest Nomad had also developed a bad migraine from the altitude and needed a path of least resistance. Boy were we wrong.

Turns out the trail stopped getting cleared due to the fact the there was about 3′ worth of trees sitting on top of about 3′ of snow, that was on top of a running stream. After a few failed attempts trying to figure out how to get through the mess, we gave up and started back to the bypass trail. This is where disaster nearly struck as the wife fell on one of the trees badly gouging her chest and shins. While it could have been much worse, she was still banged up and bleeding. Not to mention the migraine.

The end result was I wound up carrying her pack and mine back up and through the rugged bypass trail and down the mountain as she limped along. While an accident can happen on any trail, we both learned a valuable lesson about taking chances out in the back country. Thankfully, it wasn’t as bad as it could have been.

In the end, the trail wound up taking us 7 hours to complete covering roughly 9 miles and over 1,800 ft elevation gain. If you didn’t stop to take lots of pictures or try to break your leg on a tree, you could do it in considerably less time. I had heard this was a fairly popular trail, but we only saw 7 other people over those 7 hours. Despite the problems on the way back down, we still highly recommend this trail for the variety of amazing scenery.